Jeffrey Paul: The Case Against Microsoft and GitHub

Microsoft is cool again, or so the trends would have you think. Microsoft is not an okay company, despite their deliberate efforts to improve their reputation in recent years.

Collaboration with US military for conducting mass murder

For many years, Microsoft has been an eager and willing partner with the United States government, especially and particularly its military. Insofar as an organization can have a moral structure, Microsoft has none.

Way back in 2007 Bruce Schneier writes that Microsoft has been happy to provide software to large-scale killing machines of several different governments.

As far back as 1998 Microsoft was providing Windows NT to aircraft carriers like the USS Yorktown.

Mass murder is not okay, even when carried out wearing a uniform, and companies that endorse and support such should not receive our business.

Collaboration with NSA for illegal mass spying on innocent people

As you may recall from the now famous PRISM slides, provided to us by the hero Edward Snowden: 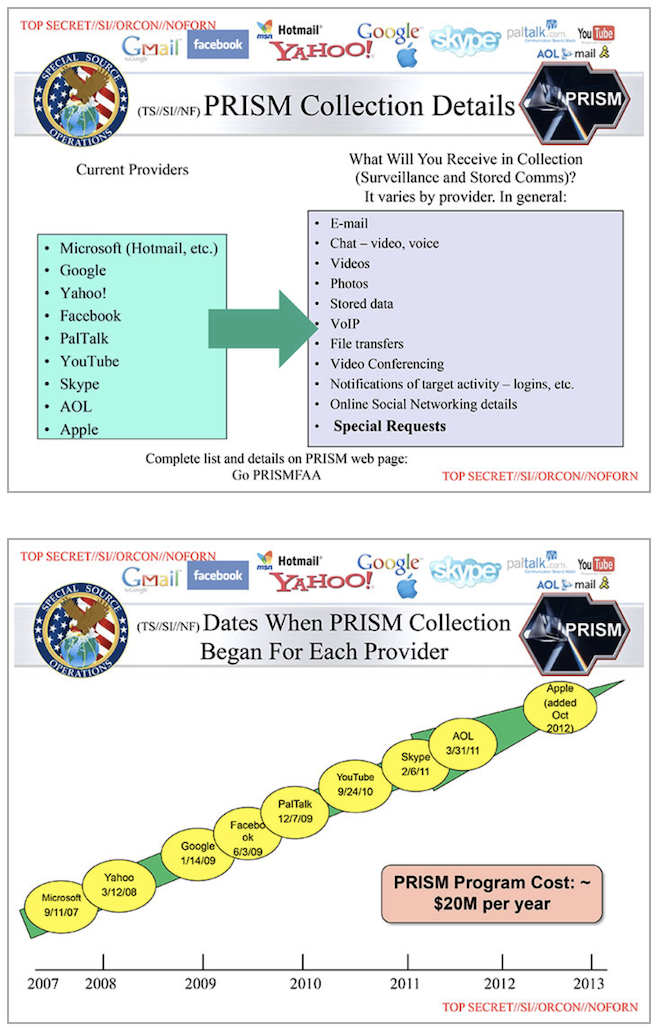 See down there in the bottom left corner? Microsoft was the very first to fall in line back in 2007 for assisting with their illegal and unconstitutional spying program. Have a Hotmail account? Microsoft has been letting the feds read whatever they like out of it without a warrant for the last dozen years.

If you have any regard for human rights or due process of law, you can see that supporting Microsoft in any effort is not a reasonable choice.

The US intelligence community uses Microsoft software to violate the human rights of billions of people, and Microsoft is happy to sell it to them and support it. Those are PowerPoint slides, mind you. (The US military runs on PowerPoint.)

The US government is now running concentration camps in which to hold migrants, including children. In case you haven’t been following along, or have had to block it out because of the sheer emotional burden that thinking about it imposes for reasonable people, here is a quick recap:

Here’s an excerpt from the New Yorker article above:

Oh, I know what I wanted to tell you. This is important. So, on Wednesday, we received reports from children of a lice outbreak in one of the cells where there were about twenty-five children, and what they told us is that six of the children were found to have lice. And so they were given a lice shampoo, and the other children were given two combs and told to share those two combs, two lice combs, and brush their hair with the same combs, which is something you never do with a lice outbreak. And then what happened was one of the combs was lost, and Border Patrol agents got so mad that they took away the children’s blankets and mats. They weren’t allowed to sleep on the beds, and they had to sleep on the floor on Wednesday night as punishment for losing the comb. So you had a whole cell full of kids who had beds and mats at one point, not for everybody but for most of them, who were forced to sleep on the cement.

These abuses continue to date. The US government has actually ramped up these camps. I weep for those who are suffering and dying inside of them every day while we go about our lives.

It turns out that GitHub has a contract with US Immigration and Customs Enforcement (ICE), which is the subsection of the US Department of Homeland Security which runs these concentration camps (another part of DHS is the TSA, which regularly gropes thousands of travelers).

In August 2019, after it became widespread public knowledge that ICE was running concentration camps for children, GitHub renewed their services contract with ICE, agreeing to continue providing them with software to carry out whatever it is that ICE does (including but not limited to torturing and raping children).

Reasonably, a lot of people who work for GitHub are upset about that. They brought their concerns to the management of GitHub, which dismissed them. At least five GitHub staff then quit.

Turns out, GitHub’s contract with ICE was worth less than $200,000 in total. That might be a lot of money to you, but that’s probably about one half to one percent of GitHub’s monthly budget. It’s absolutely peanuts to them, and they said so:

The revenue from the purchase is less than $200,000 and not financially material for our company.

Quick straw poll: Do you think that they would, with full knowledge of the concentration camps that ICE runs, after several of their best people resigned, and clearly learning of the tiny amount of this contract, decide to maybe drop not the whole of the US government, but at least the child-torturing part, from their customer list?

Spoiler alert: they don’t. Word must have come down on high not to alienate government customers in any way whatsoever. Microsoft has a decades-long history of suckling voraciously at the public teat.

To illustrate how little they care about the amount involved, GitHub donated $500,000 to nonprofits working to support immigrant communities. (Make no mistake: this is about Microsoft sending a clear message to the US government: You’ve never anything to worry about from us. Please continue with business as usual.)

For those of you who are interested in following this matter further, the @githubbers account has been pushing the #GithubDropICE tag, and the indomitable @0xabad1dea has been tweeting at them every single day since this all came out in an inspiring show of solidarity with those being detained and suffering through all of this.

Human rights are important, and torturing human beings, especially children, is a line that we must recognize should never, ever be crossed. Microsoft supports and endorses this every time they provide software and services to the organizations carrying this out.

Don’t do business with Microsoft, or any of their subsidiaries. They collaborate with those who harm innocent children and abuse and murder thousands of people.

Delete your LinkedIn. Remove your repositories from GitHub, like I’ve done. Don’t switch to GitLab, as they have the same bug. Run your own Gitea like I do instead (self-hosting is a lot easier than you think), or sign up at SourceHut. Pull your packages from NPM, another new Microsoft subsidiary via recent acquisition, and host them on your own Git server.

Don’t host your services on Azure (or AWS for that matter, for the exact same reasons). Don’t run Windows (which silently spies on all of your usage/activities anyway). Don’t post new content, comments, or interactions on these platforms, and avoid linking to them when possible. If you use the Visual Studio Code (VSCode) editor, switch to a different one (even if you like Microsoft, you should stop using VS Code anyway due to the fact that it’s spyware).

If you work at any of these places, you should quit. Not next quarter, not next month, not next week: today. (This includes any other vendors or suppliers of ICE/DHS, too.) You’re not going to talk sense into management that thinks taking child torture money is okay. Leave immediately.

Developers in general: think long and hard before you make or tools that support the GitHub or Windows ecosystems. Is a world where it’s okay to sell software to people who torture and rape children a world in which we want to live?

I shop elsewhere. So should you. It’s time to drop Microsoft, LinkedIn, Windows, Azure, and GitHub. Do not collaborate with those who assist in the torture of children.